The Archaeological Site of Olympia is a breath-taking destination. In the land where the Olympic Games were born, apart from the ancient ruins, you can visit the museum that hosts the famous statue of Hermes by Praxiteles. All these located close to one of the world’s most beautiful beaches.

The Archaeological Site of Olympia

The tour starts from Alti, the sacred grove where the temples, administration and hosting buildings and the gymnasium for the athletes’ warm up where located. Buildings and artifacts of different periods that help reconstruct the Olympic history are saved. There are signs in three languages -Greek, English and German- with details for the history, architecture, religion and everyday life. In the area you can also see scattered plaques carved with names of Olympic champions.

The ruins of the glorious Temple of Zeus, which housed the famous gold-ivory statue of Zeus dominate the center of the grove. At 12 meters high, the most famous of Pheidias' works was one of the seven wonders of antiquity. When the emperor Theodosius I forbade the holding of the Olympic Games, the statue was transported to Constantinople. There it was destroyed in the fire of 475 AD. It is worth visiting the Archaeological Museum of Olympia to see the model of the Temple with the statue inside in order to perceive the sizes.

The workshop of Pheidias, the famous sculptor of the gold-ivory statue is located a few meters behind the temple. It dates from the second half of the 5th century BC. An early Christian church was built on top of its ruins in the 5th century AD. Reliefs of floral motifs and crosses carved in stone survive today. Opposite the Temple of Zeus, there is a smallest Temple of Hera that dates back to around 1,046 BC. It is considered one of the oldest surviving temples of antiquity. During the Roman years many remarkable works of art were hosted here including the famous Hermes of Praxiteles. The magnificent marble statue today adorns one of the rooms of the Archaeological Museum. It is - without exaggeration - in itself a reason to visit Ancient Olympia.

After visiting the grove you will pass the Echo Gallery, through which the judges, athletes and heroes entered the Olympia Stadium. Completely separating the stadium from the sacred grove of Olympia, the Seven-voiced stoa - named after its acoustics, thanks to which the sound was repeated seven times.

The stadium track was 212.54 meters (697.3 feet) long and 28.5 meters (94 feet) wide and was surrounded by grassy surfaces, while all seats were made of mud. On the south slope there was a stone platform on which sat the Greek judges of the games. On the north slope, was the altar of the goddess Dimitra Hamyni. The stadium had a capacity of 45,000 spectators, so it was considered one of the largest of its time.

After the archeological site of Olympia, you need to visit the impressive Archaeological Museum. It houses findings dating from the Paleolithic to the early Christian era, but also the famous sculptures and statues, of which it is best known. 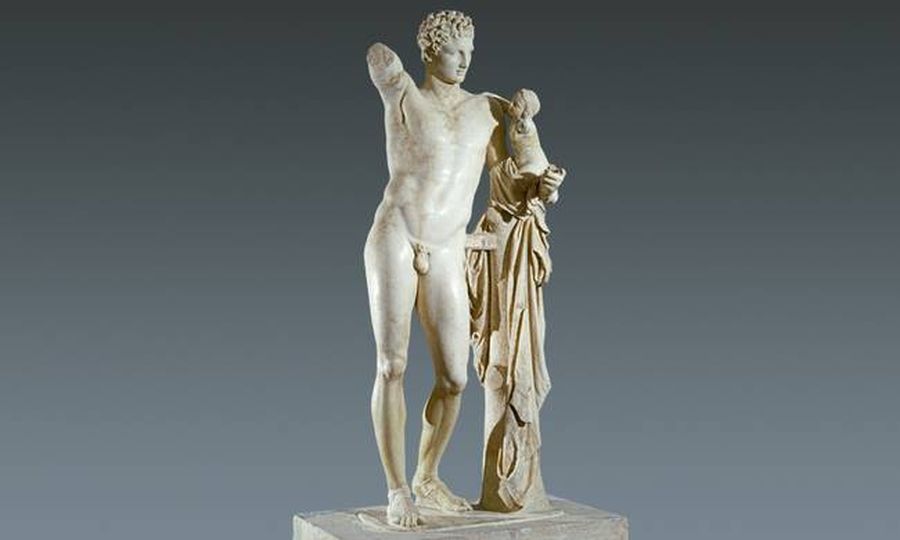 The magnificent statue of Hermes by Praxitelis occupies an entire room of the museum. Made of Parian marble, the statue, it is famous for its plasticity. It depicts Hermes holding the infant Dionysus in his arms as he carries him to the muses to raise him. The folds on the winged god's robe, which has rested on a tree trunk to rest, are utterly believable. They give the impression that if air blows, the fabric will move.

The museum also houses the scale representation of the Temple of Zeus mentioned earlier. There are also parts of the sculptural decoration of the Temple, votive offerings from the altar of Zeus, tools and objects from the workshop of Pheidias, as well as impressive statues of Roman emperors. You can also admire the famous Victory of the Peony, one of the most beautiful statues of the classical period. The model at the entrance of the museum represents the entire archaeological site.

All in all, the archeological site of Olympia and the museum are worth a whole day of leisurely sightseeing. If your time is limited, calculate a minimum of three hours. This time is enough to see only the highlights of the site and the main rooms of the museum.

Find the tour excursion to Olympia that suits your schedule here.