The small village of Ancient Corinth, with its great archaeological site and few permanent residents, is very close to the modern city of Corinth and lies under the shadow of a fortified castle…

The center of the village is the cobbled pedestrian street that encloses the archaeological site, where the Apollo sanctuary and the Roman Forum revealed by the great excavation of the American School stand out. Here, in 52 AD, in the public speaking building of "Vema", the Apostle Paul founded the first Christian church. In Ancient Corinth there are few tavernas, two or three cafes and a small tourist market. All traffic is around the main pedestrian street, next to the Ancient Corinth archaeological site. They also operate almost year-round and few rooms are rented while there are more tourist accommodation (hotels, campings, etc.) in the nearby seaside villages.

The Acrocorinth Castle is visible from afar on the steep rock and is accessible only from Ancient Corinth. The truth is that once you get to Corinth, but almost everywhere you go, you ’ve got the Acrocorinthian rock in view. It stands lonely with the oldest castle in Greece at its peak. The image of the rock from afar exudes a real sense of power, cruelty, domination. It looks so cut off from the rest of the environment. The car reaches the entrance to the castle where there is plenty of parking space and a café open all year. A heavy gate leads into the interior of the castle. Parts of the ancient pre-Christian wall, Byzantine era, Frankish, Venetian and Turkish rule are distinguished. Remains of churches, mosques, houses. Fountains and tanks are preserved behind the second and third enclosures. Romans, Byzantines, Venetians and Franks passed through here… On the castle paths we observe that the fortification is secured by a system of three enclosures separated by towers fortified with walls. At the highest of the two peaks of the hill, there are traces of the temple of Aphrodite, which was later replaced by a Christian temple and a mosque. The second peak, at the southwestern tip of the cliff, was fortified during the Franks period and constituted the inner citadel of the fortress.

The natural fortifications of the Acrocorinth rock and the walls made the area invisible. Inside it housed thousands of inhabitants, but also kings, nobles, and maids. Corinthians, Romans, Byzantines, but also Franks, Turks, and Venetians built walls around it, and by the end of the 14th century the castle had great defensive capability for the wider area. Each generation built its own temples, as evidenced by the thousands of archaeological finds found over time. At this place, according to Greek mythology legend, the winged horse - Pegasus - struck with his hoof at the top and water was poured out that watered the city of Corinth. Here he died tragically by falling with his horse on the cliff, the Byzantine Despot Leo Sgouros in order not to surrender to the Frankish sieges, and in May 1821 the official Greek flag of the revolution against the Ottoman Turks was raised. 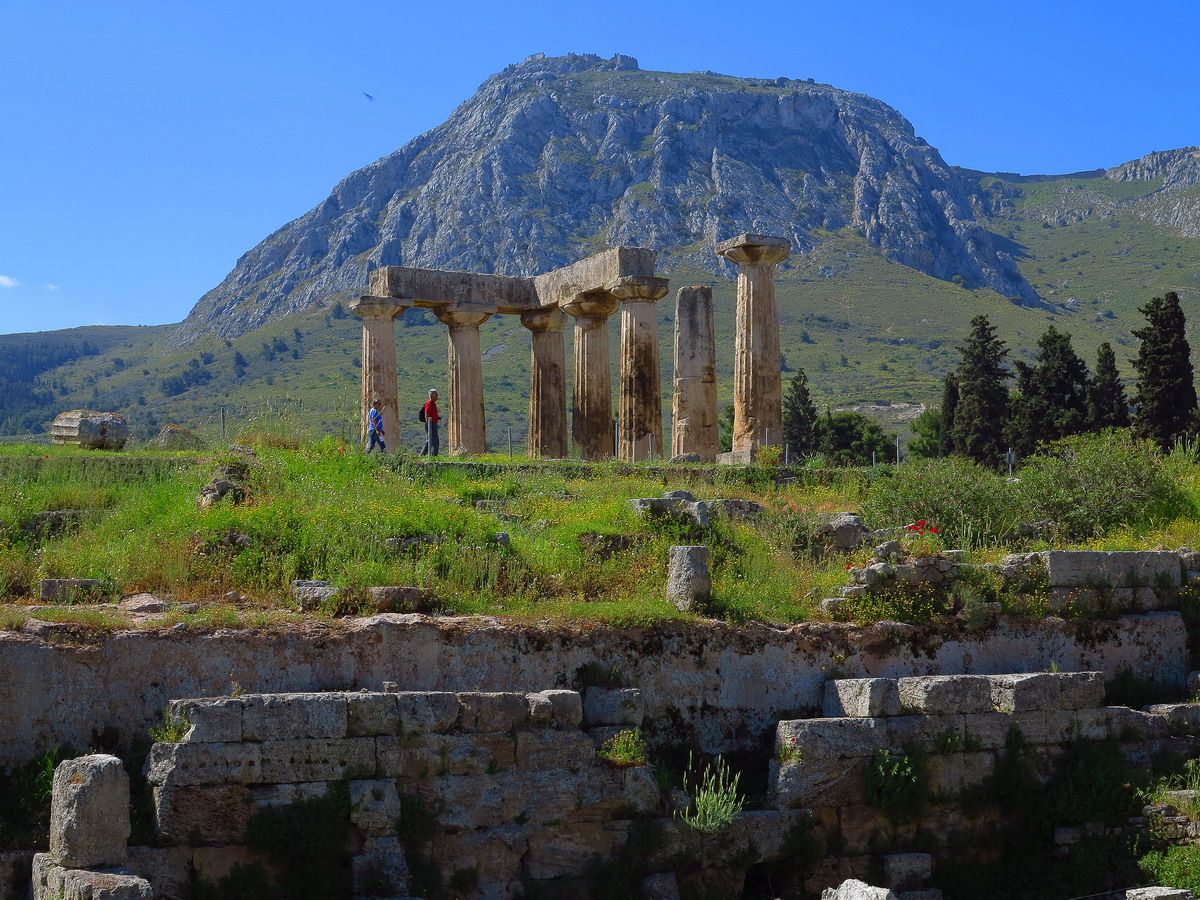 According to mythology, the rock of  the Acrocorinth was the favorite place of the god Helios, since he first received his golden rays every morning. At its highest peak was the throne Helios which he later granted to Venus. We suggest that you wear indoor sneakers and carry water with you during your visit at the Ancient Corinth archaeological site. You can find organized private tours here: www.hellenicexplorer.com.